The Washington Post babbled again today about Obama inheriting a huge deficit from Bush.  And amazingly enough, a lot of people swallow this nonsense.  So once more, a short civics lesson.

Budgets do not come from the White House.  They come from Congress and the party that controlled Congress since January 2007 it’s the Democratic Party.

In that first year, they had to contend with George Bush, which caused them to compromise on spending, when Bush somewhat belatedly got tough on spending increases.

For FY 2009 though, Nancy Pelosi and Harry Reid bypassed George Bush entirely, passing continuing resolutions to keep government running until Barack Obama could take office. At that time, they passed a massive omnibus spending bill to complete the FY 2009 budgets.

And where was Barack Obama during this time? He was a member of that very Congress that passed all of these massive spending bills, and he signed the omnibus bill as President to complete FY 2009. Let’s all remember what the deficits looked like during that period: 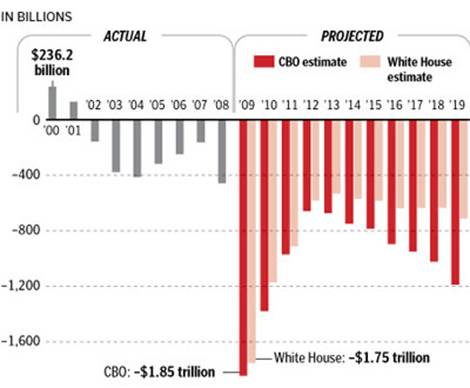 If the Democrats inherited any deficit, it was the FY 2007 deficit, the last of the Republican budgets.  That deficit was the lowest in five years, and the fourth straight decline in deficit spending.  After that, the Democrats in Congress took control of spending, and that includes  Senator Barack Obama, who voted for the budgets.

If Obama inherited anything, he inherited it from himself.  In a nutshell, what Obama is saying is I inherited a deficit that I voted for and then I voted to expand that deficit four-fold since January 20th.